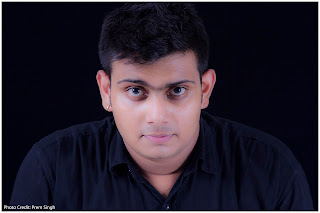 This is the story of Shahbaaz, a graphic designer, quitter, dropout, teacher, reject and rebel.6 years ago Shahbaaz joined Manzil as a student of computer class.
For 4 years he was an on/off student, dabbling in theatre and guitar lessons in addition to his computer classes. He also participated in the Manzil Radio group for a while.After having learned the basics about computer programmes at Manzil, he went out in the world and acquired a more advanced set of skills by attending various courses and learning from different people.

Starting with the founding of the band Manzil Mystics as an NGO, Shahbaaz starting giving back to the school he learned from, by taking up the responsibility of designing the entire band needed, from their logo to posters down their blog
He would later also return to Manzil as a teacher to give lessons in 3D design and Photoshop.

Shahbaaz is known by his students and peers not only for his knowledge concerning design and computers, but also for his slow handwriting, bad joke telling and open mindedness. The later expresses itself in his constant new projects, such as learning to write shorthand (to combat the aforementioned slow writing) and to learning to play the flute through courses from the internet.

He has contributed to countless NGOs, starting with Manzil but extending to such organisations as Unniti, Vidya and Child, CraftKari and many more.Unlike many other successful and motivated people however, Shahbaaz does not fall into the category of the overly self-centred, he is not driven by ambition to outdo his peers. He is simply curious, rather than competitive.

At school Shahbaaz was unable to get the know-how he wanted, particularly concerning computer and design. It is no wonder he soon turned to sources such as Manzil and the Internet to satisfy his thirst for knowledge. Dissatisfied with the Indian Educational system and failing one of his courses, he quit his studies. Now the college dropout is working for a publication house, which produces NCERT text books. He is effectively designing textbook layouts used by the very establishment that had rejected him.

Once again he will be changing directions as he plans to quit his job at the publication house in a year. He wants to concentrate on his own, newly started business, ArtBucket, which is geared towards websites, Apps, 2D and 3D design, and printing.